Home A Dog Barks A Popular Service Dog Refuses To Leave The Pet Store Even After...

A service dog named Rufio is totally in love with retail therapy, and as a matter of fact, the Golden Retriever is so fond of shopping that he just does not want it to end. 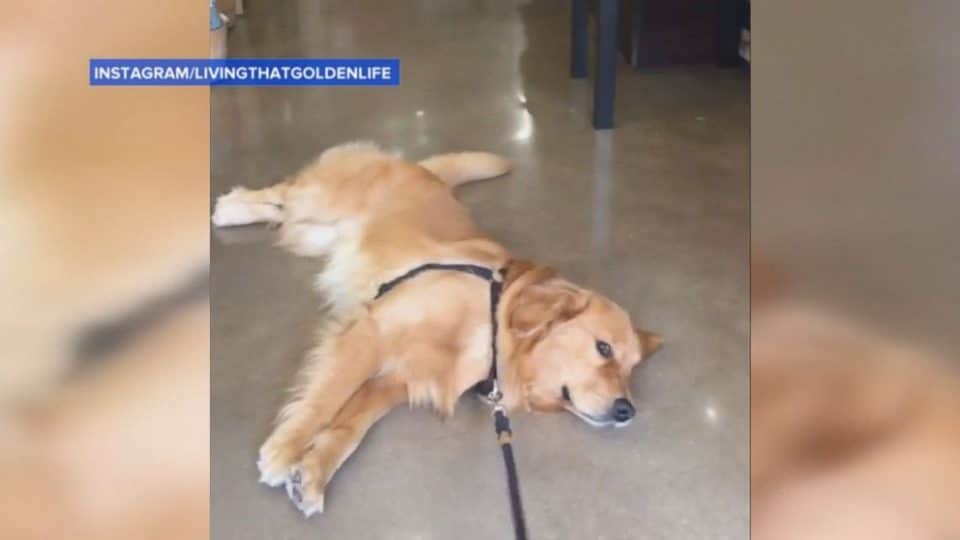 A video of the dog was posted on social media, where he can be seen refusing to leave a pet store even after the shopping was completed. The owner of the pooch gently pushed the leash of the canine to get him going, but the dog was in no mood to leave. It seemed that the party time was not yet over for the pooch.

The dog is actually a certified service dog and is an expert when it comes to helping others.

Rufio’s interests include slobbering on humans, chasing squirrels, and stealing shoes. The pooch is a cool and hip urban dog who likes things such as strolling through various shopping districts, popping into a restaurant now and then, and posing for the visitors at the park.

Rufio is actually one of the most sought after dogs in the town and has been featured by many popular media outlets.

The dog often gets recognized outdoors, but he has not let his celebrity status get into his head and believes in meeting and greeting more and more people.

Rufio is also the holder of the American Kennel Club therapy dog title. He loves to provide moral support to ailing people and also enjoys frequent visits to senior living communities. You can tell that the dog likes his therapy visits because his tail would not stop wagging.

Being such a good dog, the canine thinks he should be given some extra pampering, so the owner is quite okay with the dog wanting to spend more time at the pet store. The extra shopping time is something the pooch deserves.

Puppy Lost In A Vast Quarry Found After Hours Of Search

Rescuers Went Through Heavy Rainfall To Find An Abandoned Puppy

All 4 Puppies Abandoned Near A Busy Highway Gets Adopted By...

A group of rescuers received a report about four abandoned puppies. The puppies were left in a box near a busy highway. The highway...

Puppy Lost In A Vast Quarry Found After Hours Of Search

Rescuers Went Through Heavy Rainfall To Find An Abandoned Puppy

10 Abandoned Puppies Got Adopted After Only 3 Weeks From Rescue